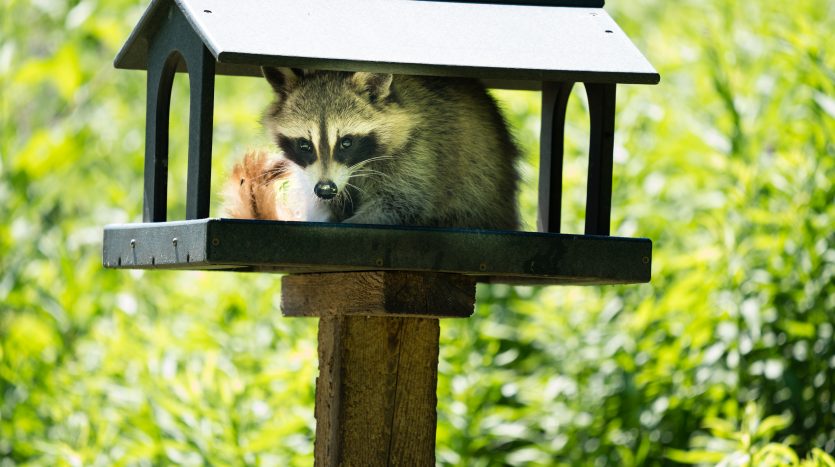 You can’t blame the raccoon for his antics. He sees your property, with its delicious vegetable garden and trash cans, and his mind starts racing. But you would rather not deliver an all-you-can-eat buffet to the bandit-masked imp, so you want to take measures to discourage his visits. Do these things and the raccoon may just decide to maraud your neighbor’s homestead instead.

That stale stub of coffee cake you threw in the trash? The raccoon wants it, and he’ll go through any lengths to get it. The feeble critter is no match for a bungee cord stretched across the lid of a trash can, however, and more presentable specialized locks for trash cans are also available. Blinking Christmas lights are known to dissuade raccoons from breaking into trash cans, and as a bonus they’ll make yours the most festive refuse on your street. Don’t set your trash cans out overnight if you can avoid it, as raccoons are nocturnal critters. You can also double bag your garbage to keep its tantalizing aroma from finding a raccoon’s snoot.

Use Smells That Raccoons Hate

That same sensitive snoot can also work to the raccoon’s disadvantage. Raccoons loathe the smell of ammonia, so a liberal application of the household chemical inside and around trash cans will keep them at bay. If raccoons are exploring the inside of your home, place mothballs in its attic and crawlspaces to help drive them away. Raccoons also dislike any indication that another animal which eats them is nearby. Coyote urine is an especially effective raccoon repellant. It’s extremely difficult to collect in the wild, but readily available online.

Chili peppers contain capsaicin. It’s the same spicy chemical that makes chili delicious, and which in high enough concentration makes a cop’s pepper spray so good at incapacitating a suspect. Interestingly, birds don’t mind capsaicin at all, which the chili pepper uses to its advantage – birds are much better than mammals at spreading seeds, so the plant benefits by being eaten only by them. You too can use capsaicin to your advantage by mixing it in with your birdseed! Raccoons will avoid seed seasoned with cayenne like the plague, but your birds won’t care in the slightest. (It might even lower their blood pressure.)

Fence in Your Garden

Raccoons are world-class climbers. If you put up a conventional fence around your garden, they will just point at you and laugh. “Get a load of this guy,” they will say to their raccoon buddies in high-pitched voices. What the raccoon is not, however, is well-insulated. Make a little fence around your garden with two wires running six and twelve inches parallel to the ground. Set up this barrier so that electric current only runs through it during the nighttime, and local raccoons will quickly learn the meaning of private property. Electricity is also useful for powering household appliances such as televisions and refrigerators.

Give Them a Scare

Raccoons are not revered for their bravery. If they sense even the slightest threat, they’ll run chittering back to relative safety. Exploit their skittish nature with motion-detecting sprinklers or strobe lights. A radio can deter a raccoon from exploring your property, although it is not 100 percent effective. There are stories of people who discovered their radios relocated to treetops the next morning. And while you might never have thought so, your dog actually can serve a purpose. Sic little Bootsy on any raccoons you discover in your yard and they’ll pass down the legend of a horrifying monster for generations.

Little Bootsy is also a liability, unfortunately. If she leaves a partially gnawed marrow bone in your yard, the raccoons are likely to take note and help themselves to it. Children are other known perpetrators when it comes to leaving food lying around. Talk to your kids about the disastrous consequences of leaving Cheerios and partially devoured Fruit Roll-Ups on the ground. If you have fruiting trees on your property, make sure their product doesn’t accumulate on the ground. Finally, while you deserve applause for being so eco-conscious that you compost, bear in mind that a raccoon will think nothing of picking morsels out of your decaying heap.